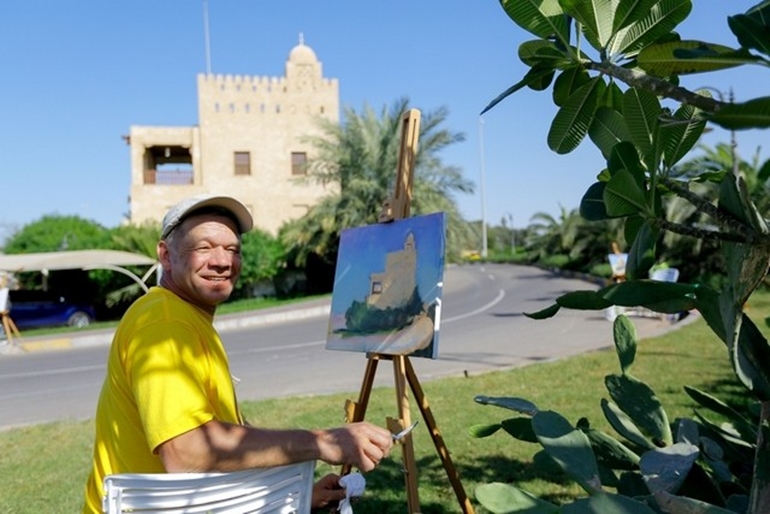 Crimean artist Igor Shipilin who is well-known in the world of Arts as a landscape water-colorist and is equally well versed in tempera, gouache, pastels and oils. He conducted masterclass to teach outdoor paintings in Abu Dhabi recently.

Underneath the shade of Al Maqtaa Bridge, a group of artists were focusing on one of the oldest structures in Abu Dhabi. Al Maqtaa Fort is 200 years old and was built to defend the island against bandits. A week-long masterclass being conducted by Igor Shipilin, whose works are displayed in the most prestigious museums of Russia: the Hermitage in St Petersburg and the Moscow Museum of Modern Art.

Shipilin, who currently has a solo show at N2N Gallery in Nation Towers Galleria, paints in the style of the modern masters. At home in Crimea, he is accustomed to sitting in the open air and painting straight onto the canvas with oil paint. He tells that Russian artists are the only ones that still paint like this. French impressionist started this tradition but it is dying now – most people work in a studio.

A total of 16 participants signed up for his masterclass, which was held from Friday to Thursday. He explained that the idea was to observe how they saw the light and shadow and the relationship between vertical and horizontal lines and between the cold and warm colors. He also told that in the end, he would teach them how to create a living painting.  He added that the biggest challenge was to put across how they felt and how they saw. There were many people who drew and painted landscapes, but often it was just a scene. Landscape is a philosophical understanding, they have to hear it, smell it and feel it and then they can really paint a landscape.

The participants in the masterclass range from beginners to professional artists.

Iwona Drozd, 56, from Poland, has never painted before, says that she feels lucky to have such a good teacher. Igor is an excellent painter and a really good teacher, he has shown them everything step by step, how to make the painting. She is a journalist and she writes books for which she always work with an illustrator. Then that she is practicing with Igor, maybe she will illustrate her own books.

Sheikha Al Zaabi, a 24-year-old Emirati who works as an events co-ordinator hopes that the class might take her one step further towards having an exhibition of her work. When she went to the gallery and saw Igor’s paintings, she knew she wanted to take the class. She was interested in working with him because he is from Russia, so he has completely new techniques and inspirations. That was her first time painting in the open air and she was excited about it.

Amira Rahim, an American who paints from her home studio, tells that as there are so few classes in Abu Dhabi, this is a rare experience. She was really hoping to learn as much as possible that week and to push herself out of her comfort zone.

All the participants experienced a good time with Igor Shipiline. They have captured landscape beauty of Abu Dhabi on their canvas. With that short masterclass, those students got chance to learnt some useful tricks and tips from Igor Shipilin to paint landscapes with inspirations.