You are here: Home / Lifestyle / The King Size lifestyle of hotels in Dubai 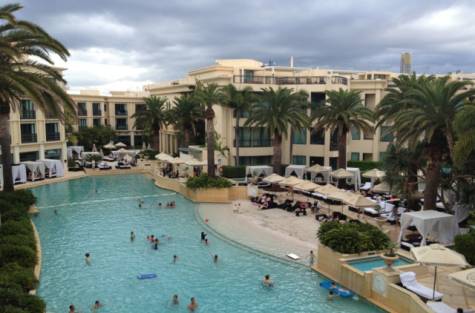 The air conditioning vents in the Palazzo Versace hotel here zigzag like the Versace design. Every piece of the giant, colourful mosaics that decorate the bathtubs is handmade and imported from Italy. Staff uniforms will be designed by the House of Versace.

With new luxury, five-star hotels opening in Dubai each month, some operators are hoping that brand loyalty and a dose of fashion will set them apart in this crowded hospitality market.

Several five-star hotels have opened in many of Dubai’s tourist hubs this year. A drive along the Palm Jumeirah, a man-made archipelago in the shape of a palm off the coast, reveals newly paved paths leading to the luxurious entrances of the Waldorf-Astoria, Sofitel Dubai the Palm, Anantara Dubai the Palm and billboards for a coming W Hotel.

International operators control about 68 per cent of the 93,000 hotel rooms available in the UAE and a majority are in the five-star category, according to research by the consultancy Jones Lang LaSalle. By 2016, more than 28,000 rooms will be added, mainly at the highest price point, where room rates are around $1,200 a night or as much as $10,000 for a suite.

As tourism and business expands in the region, hotels continue to fill. Occupancy levels in the first quarter of this year remained above 80 per cent, on par with New York City and London.

Designer hotels are aiming to take a piece of the growing pie with luxury products, spa offerings and a keen attention to detail with grand lifestyle.

A Roberto Cavalli-branded hotel is in the pipeline, while the Palazzo Versace hotel is scheduled to open in the spring of 2015. The Armani Hotel in the Burj Khalifa, the tallest building in the world, opened in 2010 through a collaboration between Giorgio Armani and a local developer, Emaar Properties.

Attempts to build designer-oriented hotels don’t always work. Elisabetta Gucci, daughter of Paolo Gucci, a former design chief at the fashion label, scrapped plans to open a boutique hotel in Dubai in 2010. Gucci Group sued Elisabetta Gucci, a furniture and interior designer whose work has no connection to the fashion house, to keep the name from being associated with hotels. Ultimately, the 87-suite hotel was cancelled.

To help protect its brand, the luxury goods retailer Bulgari is working with Ritz-Carlton to take advantage of the infrastructure and experience of the longtime hospitality chain. The companies have already collaborated on design-oriented hotels in Milan, Bali and London, and they plan to open one next year in Shanghai.

Bulgari started scouting for a location in Dubai a decade ago, looking at 30 options. The company wanted a location that encompassed a beach and an urban lifestyle. Eventually, Bulgari settled on Jumeirah Bay Island, a 6 million square foot man-made island shaped like a sea horse. The site offered a beachside retreat 10 minutes away from Shaikh Zayed Road, close to the financial district and the Dubai Mall shopping centre.

Construction started in May on the project, which is being spearheaded by a local developer, Meraas Holding. When completed in 2018, the hotel will have 100 rooms and 20 beach villas, a Bulgari bar and restaurants. Framed by lush landscaped gardens, the luxury complex will spread across 1.7 million square feet. The hotel, offering a mix of traditional and modern themes, will be designed by an Italian architecture firm, Antonio Citterio Patricia Viel and Partners, whose other projects include the Porta Nuova pedestrian promenade in Milan.

Development costs typically run higher for designer hotels because of the high-end construction, premier architects, exclusive locations and luxury products offered. The total for Palazzo Versace is expected to be around $625 million (Dh2.5 billion), according to Jafar of Enshaa.

The details matter to a discerning audience, Jafar said. At the Palazzo Versace in Dubai, the countertops are made of the best marble available. The colourful vases — Versace, of course — that adorn them can cost up to $1,500 each. The empty pool under construction has a hole in the centre to make room for a mosaic the size of a small studio apartment.