You are here: Home / Attractions / How to access the Fireworks Display in Dubai on New Year Eve 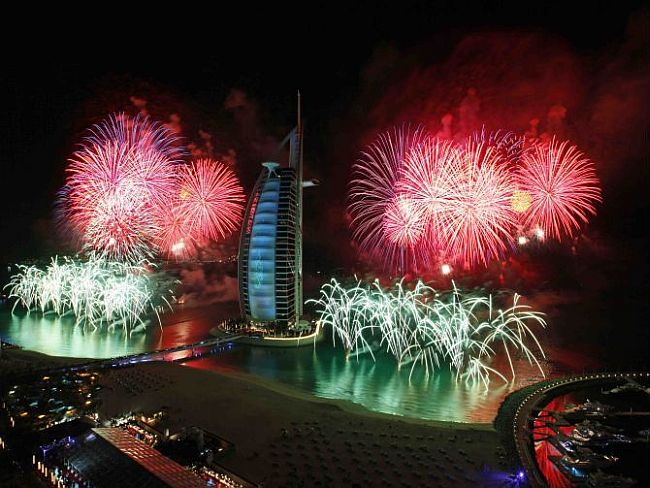 Dubai is all set to create a World Record of Fireworks display on this New Year’s Eve.

Here is how you can access and enjoy the Fireworks display at Palm Jumeirah and the World Islands.

Entry to the Palm Jumeirah Island, will be restricted on May 31 till 1am on Jan 1. However, those have bought tickets to Sandance Music Festival, which will be held on the New Year’s Eve at the Atlantis, will have access. Residents and guests of hotels at Palm Jumeirah will be issued passes.

The best locations to enjoy the show from are the Jumeirah Beach, Dubai Shoreline, Umm Suqueim Beach as well as the Jumeriah Beach Residence.

People can also enjoy the show on TV, with DubaiOne presenting live coverage of the spectacle. As many as five helicopters have been deployed to shoot the event from aerial locations, while a large camera crew has been deployed on land as well.

The show can also be enjoyed live through Youtube at youtube.com/dubaiworldrecord.

8am-9pm: Access to event pass holders in their personal vehicles and taxis.

9pm-10.30pm: Access to passengers in taxis holding event pass only.

Residents will get access pass from respective building concierges. Authorities have advised residents of Palm Jumeirah to limit the number guests due to shortage of parking on the Fronds.

Each villa is allowed only five guest vehicles, all of which need to have a pre-arranged car pass.

Walking around The Palm Jumeirah will be restricted from 10.30pm.

No deliveries to The Palm Jumeirah will be allowed after 5pm on December 31.

Monorail Operation: The Palm Jumeirah monorail will be closed from December 26 to January 2, 2014.

Safety zones: Police will be creating Safety Zones around the locations from where the Fireworks will be fired. Movement around the Trunk Road, the Crescent Road, the Monorail, in the water between the Fronds in the Crown area will be limited.

Authorities have advised travelers to use public transport on New Year’s eve as the Dubai Metro will operate 24 hours, while additional buses will also operate to help people move smoothly.

Additional trains will deployed and the frequency of train trips will increase to cater to the rush.

Traffic diversions have been planned around the fireworks areas across Dubai and access to cars will be limited to the Palm Jumeirah. Access to Dubai Mall and Downtown Dubai by cars will also be blocked once the parking gets full.

Special parking provisions have been made at Meydan and World Trade Centre from where the shuttle bus service will be provided to Dubai Mall.

Additional taxis will also operate around malls and locations where the fireworks will take place.

Where else can I see fireworks in Dubai on December 31?

Following the six minute spectacle at Palm Jumeirah, a 15-minute display will cover the Jumeirah beach, with the Burj Al Arab, Madinat Jumeirah and Jumeirah Beach Hotel in the background.

In its annual New Year Gala Downtown Dubai will put up yet another show of lights, color and music that will begin shortly before midnight and will last 20 minutes. The show will have the iconic Burj Khalifa as its backdrop.

Heading further down, Dubai Creek will have its own show at Dubai Festival City with fireworks and synchronized light and water show.