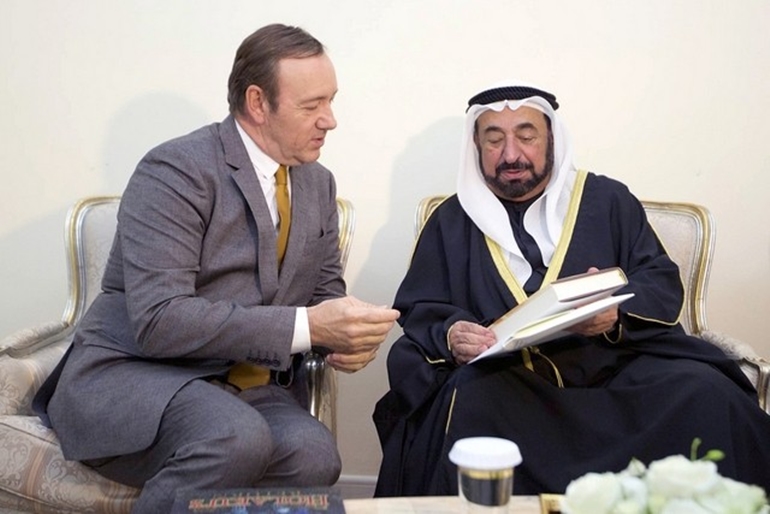 Kevin Spacey was in Sharjah Institute for Theatrical Arts, to watch an Arabic play put on by young theatre students he had spent two weeks personally mentoring, instead of collecting his second Screen Actor Guild Award in Los Angeles held on the same day the play was performed at theater.

The programme, Home Grown, is an initiative by the Kevin Spacey Foundation to help emerging artists and aspiring actors through scholarships and grants.  A recent performance by Iraqi playwright Hassan Abdul Razzak called Dhow Under the Sun, saw 34 students from across the Middle East and North Africa perform.

Spacey addressed to the audience before the performance as that night was the kind of night that he had grown up with and experienced when he was very young, he had to be part of many [theatre] programs where he was brought together along with many emerging artists, put together plays, did workshops with professional directors, artists and working artists

Further he told that a night is different because all the performers there were from so many different places. At Home Grown, He discovers local talent and gives them the skill and resources to survive and succeed on world stages. His foundation is proud to partner with the Middle East Theatre Academy to bring Home Grown to this region and have it hosted this year in Sharjah, the centre of heritage and culture in the UAE.”

Spacey also told that more than 300 aspirants from 17 countries auditioned for the two-week program. They chose the participants based on their talents, ambition and potential, and they came from a mix of abilities — from relatively experienced to newbies, To give them a sense of the ambition of the project, for some of the participants, this is their first time outside of their countries. Many of them have left jobs, missed weddings and postponed their plans to be there. They had been working together for these past two weeks. In that time they had developed their skills as actors, headed up by spacey’s professional team from the UK.

Predominantly in Arabic, with English and Arabic subtitles screened next to the stage, Dhow Under the Sun is set in a refugee camp called Dhow, where residents of a city devastated by a flood have sought refuge. There, a young engineer tries to find a solution to her settlement’s power problems with the help of Anis, a cigarette seller. Through this premise, a story of romance, of loss and of believing in one’s dream despite many obstacles, is told. Spacey evoked the spirit of Shaikh Zayed in his speech, saying it inspires the vision for Home Grown in the Middle East that just as the UAE was brought together by the vision of man who believed that he could unite all under one banner, that night that have celebratde that spirit by bringing together these young remarkable talents from so many different places.

The theatre’s director Matt Wilde, who worked with the participants to perfect their performance before presenting the full show to Spacey last night, says he has been amazed by the energy of the participants. They only had time for one dress rehearsal. He would have liked two but they didn’t have time. The talent they had seen so far is brilliant. Further he said if this is just a small bit there on that stage, it’ll be very exciting to see what more is out there.

The play was very successful, and give a new platform to the theater life with collaboration of KSF and META