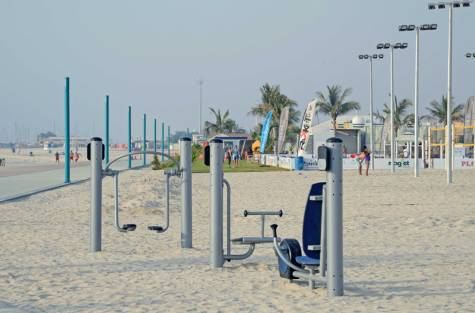 Recreation has always been the positive part of the Dubai City. The city now opens up with another gorgeous project as the Jumeirah Corniche opens up for the public. The 14 km long stretch beachfront promenade offers exciting recreational activities.

Jumeirah Corniche opens for public on Sunday as work on phase two of the 14km long beachfront completes, the Roads and Transport Authority (RTA) has announced.Phase one of the project – a 2km long stretch from Dubai Sailing Club to Dubai Municipality’s Umm Suqueim Centre – opened in July for recreational activities.

Launched by His Highness Shaikh Mohammad Bin Rashid Al Maktoum, Vice-President and Prime Minster of UAE and Ruler of Dubai, work on the Dh100 million project began last year.Overlooking six residential neighbourhoods, the project gives a complete facelift to the 14km long stretch from Dubai Marine Beach Resort up to Burj Al Arab Hotel, making it a hub of healthy lifestyle in the emirate.

With facilities like jogging, walking, swimming, rowing and cycling the corniche will be a major draw for families as well as outdoor enthusiasts.”The Jumeirah Corniche is a gorgeous addition to the area offering relaxation as well as offering greater opportunity for the public to enjoy and practice several activities like swimming, jogging and other sports,” said Mattar Al Tayer, Chairman of the Board and Executive Director of RTA.

Developed by RTA, the entire stretch of the sandy beaches will have all the basic amenities apart from having a five-metre-wide walkway, a four-metre-wide jogging track and a cycling track extending the entire corniche.

The facilities of recreational activities include retail kiosks, shaded benches overlooking the sea as well as showers and public toilets.The Jumeirah Corniche will be linked at a later stage with the Walk and the jogging and walking tracks of the Dubai Water Canal. The Canal, which links the Business Bay with the Arabian Gulf, will add 6 km to the Dubai Waterfront.

The new recreational corridor will now host many exciting recreational activities like Cycling, rowing, swimming, jogging and many others. It will keep Dubai happy and healthy as well.