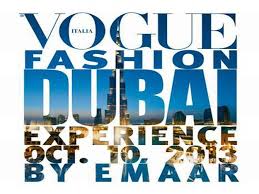 VFDE, organised by The Dubai Mall and Vogue Italia, will also pick eight upcoming designers, who have been mentored by the magazine’s editor-in-chief, Franca Sozzani. The eight designers will then showcase their collections at the mall’s fashion catwalk on the opening day on Vogue Fashion.

The 20 designers were selected based on originality, the concept behind the project and personality of the brand, said organisers. The eight designers to be mentored were picked by Vogue Italia.

The 20 brands to appear at the International Talents Showcase are:

— Anabela Chan from the UK for Anabela Chan,
— Astrid Sarkissian from France for Astrid Sarkissian,
— Odely Teboul and Annelie Augustin from France and Germany for Augustin Teboul,
— Faiza Bouguessa from France/Algeria for Bouguessa,
— Carlotta De Luca from Italy for Charline De Luca,
— Martina Grasselli from Italy for Coliac,
— Dora Abodi from Hungary for Dora Abodi,
— Lubna and Nadia Al Zakwani from Oman for Endemage,
— Eun-Jung Lee from South Korea for Eun-Jung Lee,
— Heaven Tanudiredja from Indonesia for Heaven Tanudiredja,
— Hema Kaul from India for Hema Kaul,
— Farah Nasri from Lebanon for Hooked | HKD,
— Eva Lai from the USA for i’Alave,
— Marius Janusauskas from Belgium for Marius Janusauskas,
— Millicent Nobis from Australia for Mies Nobis,
— Kostya Omelya from Ukraine for Omelya Atelier,
— Reem Al Kanhal from Saudi Arabia for RK Designs,
— Sarah Angold from the UK for Sarah Angold Studio,
— Shamsa Alabbar from the UAE for Shamsa Alabbar,
— Steven Tai from Canada for Steven Tai.

The eight brands to be mentored by Vogue Italia are:

So many talents at one place, it is going to be exciting in the Vogue Dubai Fashion Event. So, are you still waiting? Well, start planning for the big fashion event.