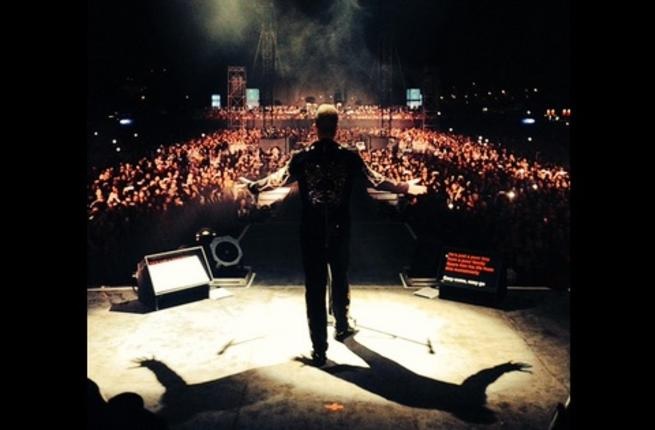 The show stopper, a Hollywood singing icon astonished Abu Dhabi crowd with his jaw-dropping performances. Robbie Williams delivered on all four counts of what you’d expect from one of the singer’s trademark concerts and did so in consummate style.

Taking to the du Arena stage, Yas Island, at around 9pm, the 20,000 strong crowd was already buzzing by the time those familiar opening chords of Let Me Entertain You were struck up, the atmosphere raising to a fever pitch the minute he appeared from behind the curtain.

That recognizable swagger, an excitable, almost kindly manic glare, new blond haircut and comedy devil horns, “for the next two hours your a**** are mine!” was all he needed to exclaim to address the audience. There are few showmen left who can lead vast numbers of guests on a journey encompassing classic, original and covered material, barmy antics and funny asides on such an awesome scale and still make the gig appear intimate. Williams’ charisma does just that though.

Rock DJ followed the opening gambit, another classic. While other acts may wish to force their more obscure or less-well-known newer work on spectators, Williams is content to give them what they actually desire – a night full of songs to sing and dance along to.

Possibly the only new tune was an acoustic ballad written for his recently born son, Charlie, that was a triumph in its bizarre sentiment. Another touching moment was the appearance of Williams’ dad, fellow professional singer Peter, for a duet of Robbie’s 2001 hit Better Man.

For an inaugural Robbie Williams experience, Abu Dhabi was also treated to some marque sass. During a performance of The Road to Mandalay, the star encouraged everyone to vocally join in with the instrumental refrain. Williams was subsequently impressed by the number of “bummers” there were in attendance. A quick costume change later – he put on a skirt – Williams was back to give a lucky ticket-holder a treat. Yasmine from the Philippines was chosen to help him perform Candy.

Other points of note were Williams’ like-for-like cover of the Lorde hit Royals, a barbershop version of R. Kelly’s Ignition and two Queen numbers We Will Rock You and Bohemian Rhapsody before rounding off the night with his piece de resistance, Angels. Simply brilliant.

All in all, the whole show was packed with remarkable performance, giving the crowd a treat full of fun, thrill and entertainment – something worth paid for.