You are here: Home / Food / Taste the International Flavour of delicacies in Dubai 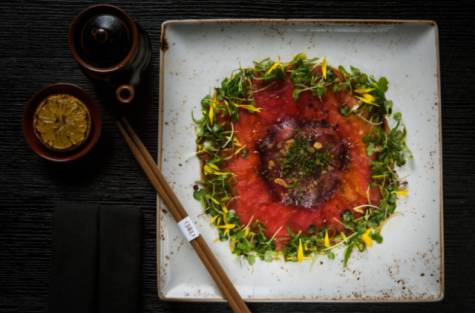 Dubai is the city of elegance and also the city of taste and delicacies. There is hardly any delicacy in the world that is not available in Dubai. The city hosts plenty of restaurants that do not only provide you the international flavour but also give you the welcoming hospitality.

Michelin-starred Australian-Lebanese chef Greg Malouf’s first restaurant in Dubai will open in the fourth quarter of this year, tabloid! can confirm. Called Cle Dubai, the restaurant, bar and lounge is located at Al Fattan Currency House in DIFC. The Melbourne-born chef is famous for his take on Lebanese food, especially through his many cookbooks. tabloid! recently had a sneak peek of the venue, which features stunning views of Burj Khalifa and a terrace for alfresco dining taste.

The dining and partying hotspot Iris is avoiding the heat by going inside from last week of August. The Lebanese origin restaurant and bar on of the Oberoi Dubai’s rooftop is famous for its wraparound terrace space. Now they are taking the humidity into account with a new indoor lounge and bar. They’ll also be adding live music and guest DJ performances to the already fantastic soundtrack.

This isn’t some tweak: The chefs at the modern Japanese restaurant have added 36 new dishes to the line-up, including vegetable dishes, seafood and meat. Also new on the table: the tableware (designed to match what’s on the plate, would you believe it?). So what’s there to eat? Try aburi shime saba (seared Norwegian mackerel with garlic salt and ginger, among other flavourings); tuna and foie gras carpaccio; miso-baked Atlantic lobster stuffed with prawn surimi; and steamed fillet of seabass with garlic soy vinegar.

The Indian TV chef and cookbook author will be in Dubai on August 15 to ring in the 68th Independence Day of India at his restaurant Options by Sanjeev Kapoor at Dubai World Trade Centre, with a special menu (available August 12-23). Those booking for the special evening on the 15th, 47pm-12am, get a meal, a meet and greet with Kapoor and a live cooking demo.

The opening of the Belgian Café has been postponed until further notice, the hotel tells us. We’ll bring you the date as soon as it’s announced.  The popular Belgian restaurant and bar will open at Radisson Blu Hotel, Abu Dhabi Yas Island, serving Flemish dishes such as steak tartare, beef stew and of course, tons of mussels and fries with mayonnaise.

If you’re looking for music and food overlooking Yas Island’s marina, mark your diary for September 18. That’s when Burlesque, a new restaurant at the Viceroy Yas Island, is scheduled to open. Featuring a live band and DJs and pink and purple velvet decor, it will seat up to 98 (there’s also a private dining room; the bar and lounge takes another 90). Dinner, served as live shows take place on stage, is Mediterranean with a twist — the menu features beef Nicoise, seafood paella, seabass with pine nuts, olives and roast leeks, and a beetroot risotto with feta, saba and mint with wonderful taste.

The delicacies of Dubai has unique style. Does not matter what cuisine you are trying, French, Spanish, Indian or Portuguese you will find the perfect atmosphere and taste to enjoy it. So, taste the international flavour in Dubai and feel it.