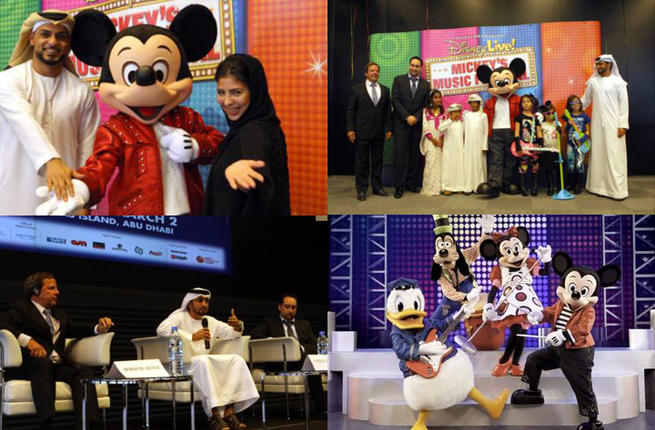 Disney fans in Abu Dhabi can expect a spectacle of their favorite Disney characters in a musical performance that is set to take place from February 26 to March 2 at du Forum in Yas Island.

Disney Live; Mickey’s Music Festival will bring together more than 25 Disney characters for the music mash-up, which marks the first ever Disney performance in the UAE, organizers revealed on Tuesday.

The characters include Mickey, Minnie, Goofy, Donald Duck, Aladdin, Jasmine, The Little Mermaid, Woody, and Buzz Lightyear, among others.

Of course, it would not be a Disney production without favourites such as A Whole New World from Aladdin, Under the Sea and Kiss the Girl from The Little Mermaid, which are set to delight audiences.

The performance begins with audiences watching a state-of-the-art video projection of the frenzy backstage, which spills onto the stage as Mickey Mouse welcomes guests to his concert tour. Audiences will then be taken to a world of acrobatics, dance, and music with characters from Aladdin, and The Little Mermaid.

Toy Story characters will then put on a boogie rodeo-style performance.

The production is the sixth incarnation of Disney Live! since its creation in 2004. It recently completed a tour of Turkey and Cyprus, and organizers said the performance next month will be the first in a series of Disney productions in the UAE over the coming years.

At an audience capacity of around 2,100 people per show, organizers expect a total of 20,000 people from the UAE and the Gulf region to attend.