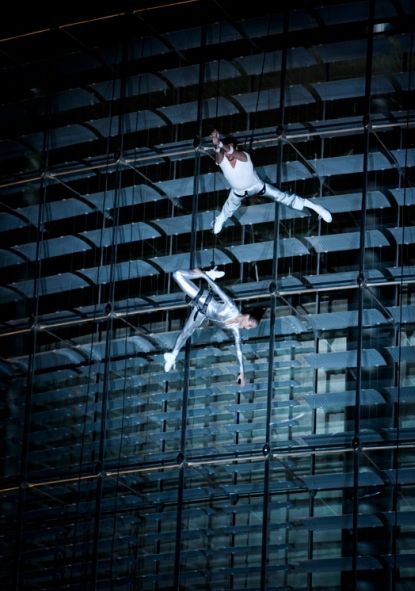 On 20 January, Dubai’s VIP’s and fashionistas witnessed the first ever vertical catwalk on the world’s tallest building, Burj Khalifa. The audience watched as acrobats glided their way down the 828 metre building wearing an array of designs from some of the UAE’s hottest stores.

Meanwhile, models strutted their stuff along a more conventional catwalk at the foot of the building, showing off some of the bargains you can still get your hands on at the Dubai Shopping Festival. It may sound a bit strange at first but the show was mesmerising and made a unique change from the traditional-style catwalk.

The presentation showed 40 looks from high-end and high street stores including Etoile, Christian Dior, Issa London, Raoul and Amanda Wakeley Atelier. The show was put together by Etoile Boutique who displayed some of the hottest pieces from their new collection and DSF bargains.

The show was one in a long line of events for Dubai Shopping Festival which runs until 2 Feb throughout all UAE stores.