You are here: Home / Fashion / What women in UAE wear under the Abaya 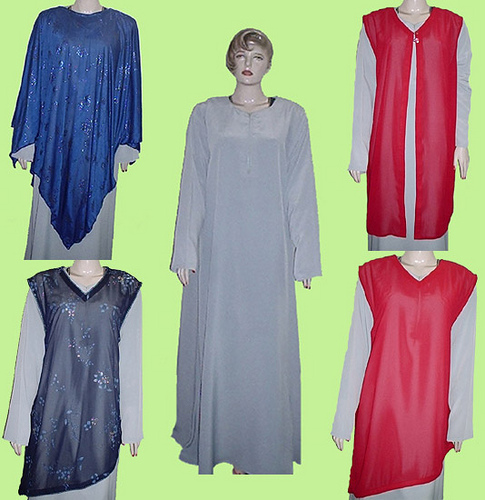 There is a perception that in UAE, a lot of designer work goes into the making of trendy and stylish Abayas. However, there is more to the woman fashion scene in Emirates than is commonly perceived. Naturally, in accordance with the Islamic principles of life, it is obligatory for woman to be modestly dressed all the time. In United Arab Emirates, irrespective of woman’s religion they are expected to be wearing Abaya. But it is common observation that regardless of religious affiliation, women will wear whatever they like under their Abaya.

It might be surprising for many to know that under an Abaya all sorts of clothing styles are in vogue. Be it the conservative dressing style like Thobe and Jalabiya or the modern and western style of shorts and tops, women in UAE wear everything under their Abayas.  Also, if a woman is tired and needs to go out for some business, she can just pull Abaya over her pajamas and go out do her work. The reason behind this trend is that the Abaya is opaque and stretches up to ankle length. Thus, it does not disturb the cultural practices.

Unlike conservative Emirati women, the liberal and western minded women may choose to wear less under Abaya. As the Abaya is opaque and long, so hardly anyone would know about this fact. The clothing range includes jeans, t- shirts, tops, skirts, maxi, quarters and gym clothes. The liberal oriented women try all these varieties in the clothing style under their Abayas.

When it comes to wearing dresses under the Abaya, the women in UAE take weather and season also in to account. Their choice of outfit under Abaya changes with hot and cold weather. In summers, most of the women wear thin and short clothing under their Abayas in order to beat the heat. However, in the winters, normal and modest dressing along with the trendy sweaters and jumpers is put on by women under their Abayas. Thus, designers working on creating regular outfit and Abayas for women, also have to take seasons into the consideration as it matters a lot.

It is Middle Eastern culture to wear Abaya due to religious significance. Thus, women have to manage their clothing style along with the tradition. They do it by wearing different kinds of outfit under the Abaya and satisfy their appetite for new fashion trends. Increasing influx of people in UAE from Europe, America and South Asia, have given plethora of options to women for dressing under Abaya. Today, Emirati women can wear jeans and skirts or any other clothing of her choice under an Abaya without upsetting the traditional cultural norms of the society.