You are here: Home / Featured / An Interview with Lisa Sass, Costumer – Written by Nigel Holt 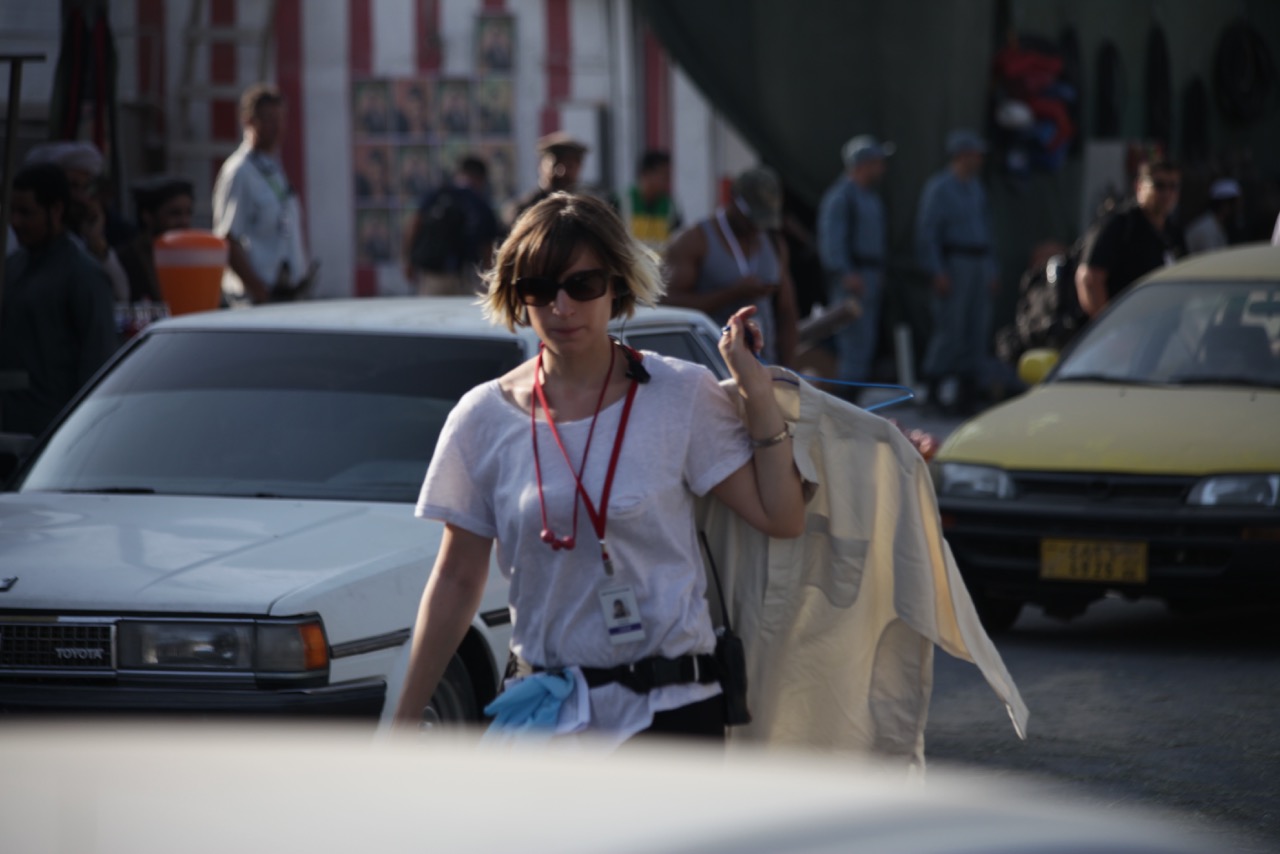 I: I’m lucky enough to be joined today by Lisa Sass, an up-and-coming costume designer who’s worked in Europe, and the Middle East, and is fast becoming a name in the industry. Welcome, Lisa.

LS: Thank you for having me!

I: So tell us a little about your background: where are you from, and where did you get your ideas from?

LS: Well, I’m German – and I was born in Hanover, Germany, so I suppose I’m a Hanoverian! I was interested in costume design from an early age, and I did my Bachelor’s in costume design as soon as I could. It was something I’d been waiting to do for years. I soon had the opportunity to spend a semester in Hiroshima –a great place to visit, and even better to study, I have to say. Since 2010 I’ve been working on a range of movies and programmes in a host of different countries, and I just haven’t stopped, thank goodness!

I: That’s terrific. But on the matter of what a costumer is – I’m sure that readers have an idea about what it is that you do – could you go into more detail for us?

LS: Well, as you said, I’m a costumer – someone who has to deal with all the issues that if a film or TV production goes well, you don’t see! Essentially, my job is to work on the character’s appearance so that it fits with the artist’s final rendition of that person.

I: How does that work, exactly? What do you need to do to make the character seem like the actor?

LS: Well, after the costume designer’s vision has been created, the costumer has the responsibility to make sure that every little thing about the appearance of the character is thoroughly believable. It’s about creating the look that ties in with what the director is aiming at; to keep costumes beautiful, or to progressively age them, realistically over the length of the movie – this is especially hard as the film is made out of sequence, so a keen eye is needed at all times.

I: So, your job is to ‘pull the strings’ of the film so that the costumes appear to work seamlessly, so to speak?

LS: Yes, it’s important to stress the thing that’s most important here. What I’m about – and I’m very passionate about this – is to create characters. It’s not a matter of finding a good fit of clothes, it’s about creating the means to make the actor see themselves as that character. You know, there’s nothing worse than watching a film, and your attention moves to something that should be invisible; a character’s watch is from the wrong period; the bloodstains that appear in a fight scene just don’t seem real; the colour matching on a costume doesn’t work. All minor things, but a real costumer notices – and so does the audience.

I: You have experience in Germany and the Middle East – how is that different from say, the US?

LS: The most common difference is the size of the crew that you’re working with. In Germany, we’re very economical; we have smaller crews, and people often have to do the work of other people, who in a larger production, would have its own expert. American productions are often expensive, and have a full-range of people who know particular details that might seem immaterial to a viewer. In the Middle East, it’s very much on the same kind of level; it has a shorter history, and is very much dependent on the people that are employed. These come from everywhere, with a very international background, but are Asian-influenced, and so the mix is often quite complex. It’s people coming together with a wide variety of experience. There is, however, though, a much bigger focus on morality that you don’t get in western productions. The appearance of the character has to be within stricter moral guidelines, and so containing things that aren’t so real, but are expected by the director, and the audience.

I: So which productions have you worked on? Are some more interesting than others?

LS: Of course! Thanks to the recent upswing in demand for desert locations, Abu Dhabi and Dubai have been very popular, and despite what you might think, working out in the desert is really interesting. It brings a whole wealth of experiences – and problems, too – but nothing that an experienced costumer can’t deal with! I was involved with Star Trek Beyond – and that was a thrill to do. Apart from all the buzz of meeting famous actors, it’s actually the job that has the greatest excitement for me. When I was working on Furious 7, from the Fast and Furious franchise, in Abu Dhabi, it was the difference between working in the desert and in the closely-knit streets of the capital that made it really hard work – but really fascinating, too. You know, there may be car chases and all sorts of action going on, but my focus is on the costume, and how it impacts what the actors are doing on the screen. If they aren’t

comfortable, you’re just not going to get the best performance. And if the performance isn’t right, the film isn’t going to be either.

But, perhaps the most famous ‘import’ into the region was the recent Star Wars movie – Star Wars VII – The Force Awakens. It was a threshold film that was immediately promised a place in the halls of legend for moviegoers – and it certainly lived up to that expectation. I can definitely say that it was in the top three movies of my career, and a thrill to work on. There were so many aspects to the movie, so that I was constantly rushed from one place to another and to keep my head at all times, and over hugely long shoots. Another great picture is War Machine, with Brad Pitt. The movie is themed in the Afghanistan war, a Satire based on the book ‘The Operators’ by Michael Hastings and it was a terrific experience to work on. It gave me the chance to go through pretty much all of my skills.

I: Interesting. But what would you say is the most important asset that a costumer has?

LS: Patience! While it’s a job of great skill – and with a lot of experience and insight – with the often sixteen-hour shifts, you need patience. The ability to organise is crucial, and there is a never-ending learning process. One minute you’re working with a crew with a Middle-Eastern focus, the next you’re on a job that needs you to think about character with the American audience very much in mind. You most definitely need patience!

I: How much is being a costumer based on your personality, rather than just a set of skills?

LS: Well, there are elements of what you do that are, what you might call, personal. Your ability to sew just about anything you can think of, is the core skill you need to have on tap, but these are just the skills you’ve developed – most often you need something more than your skills. You need be creative, as no two jobs will ever be entirely similar. Working with international crews from all kinds of background makes you reassess the processes you need to survive, in what is a very challenging industry. The ability to work with all kinds of people who just see things differently from you, is a challenge that needs to be confronted right at the start of things, or you’ll never be the success you want to be.

I: Well, thank you very much, Lisa Sass, for that fascinating introduction to both the industry, and the nuts and bolts of your daily job. It’s obviously a labour of love – and made much more interesting thanks to your insight. Thank you.

ES: It’s my pleasure. It’s been nice to talk about what I love to do! Thank you.

Started working on feature film and TV series in Germany during semester breaks and as additional costumer during University since 2010 as well as small jobs like music videos as Costume Designer.

First job after graduation was an Australian TV Series ‘In Your Dreams’ (July-Oct. 2012) in Lower Saxony, around Hannover.

2013, moved to Munich, amongst others worked on successful, long running procedural police TV series that started airing in 1978, ‘SOKO Munich’ which was the first of it’s kind and has to this date 7 still airing spin-offs

Then, branched out into Styling for Commercials

2015, ‘Star Trek: Beyond’, followed back to back by ‘War Machine’, a Netflix production starring Brad Pitt with a release date in 2017. 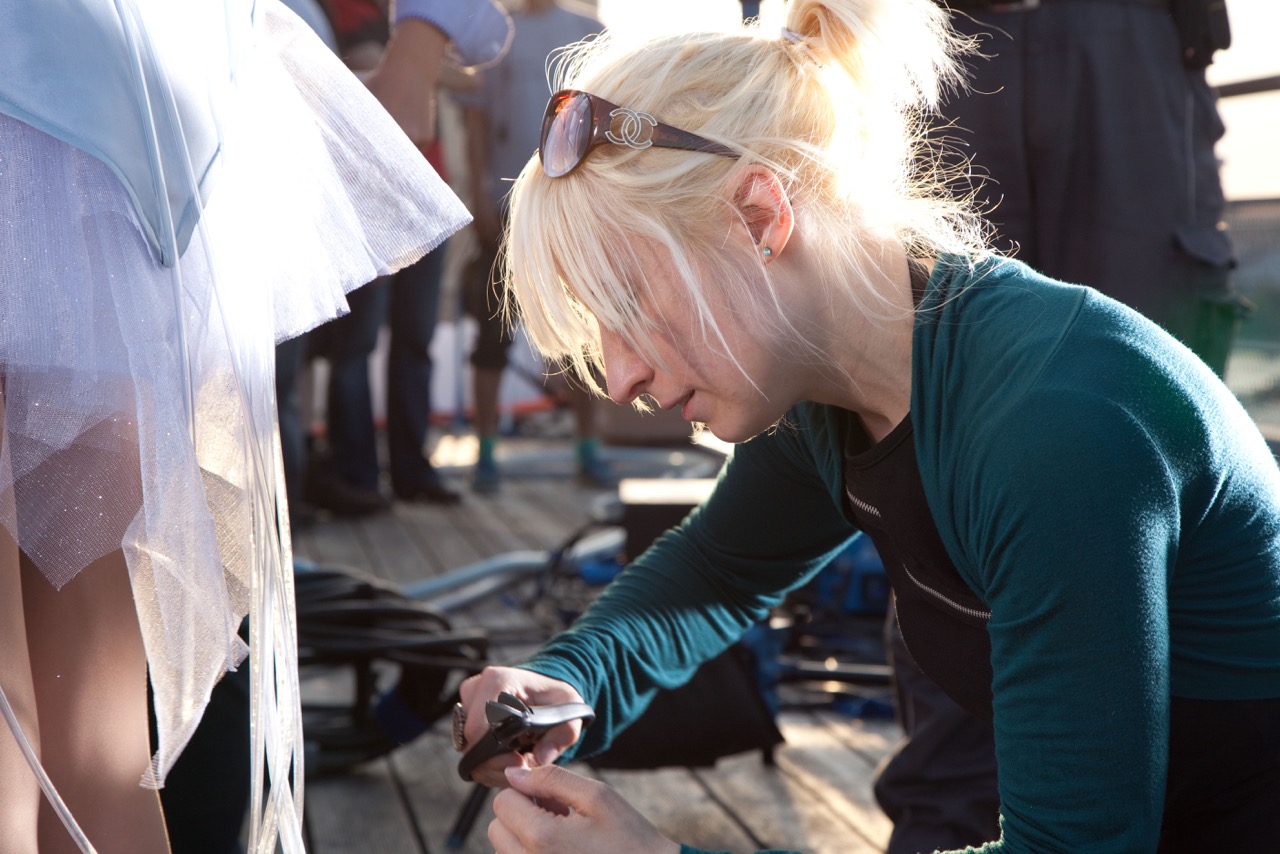