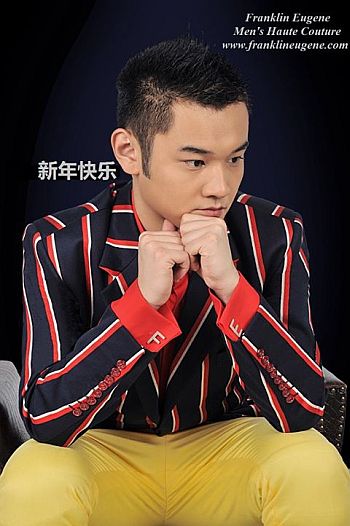 Made to order at Savile Row Dubai (Eugene’s store at The Walk), the bespoke jacket is hooded and three-buttoned. It is slim, black and semi-formal.

It has become the talk of the town because of its unlikely ‘inspirational’ link with the case of Trayvon Martin, a 17-year-old American-African high school student who was shot dead in Florida last year. George Zimmerman, a 28-year-old mixed-race Hispanic and neighbourhood-watch coordinator, was charged with murder amid widespread media coverage in the case, but later acquitted in July this year.

To critics who may accuse him of using Trayvon Martin’s name to promote his line, he clarified: “The design inspiration has nothing to do with the tragedy. It is not a statement on that part of the case.”

Eugene, who has been in Dubai for five years, said he gives a name to all his collections. The 2013 Masculine Collection, of which The Mr Martin is a part, comprises 10 haute couture suits, each with a name. They include: The Alveaux, The Bradley, The Cooper, The Dexus, The James William, The Jose Luis, The Maxwell, The Sortirios, even The Nehru.

“The overall design inspiration was drawn from various forms of the masculine archetype and the world of auto and bike racing. Each cut invokes the energy and aura of this archetype and is a work of art in itself,” said Eugene.

“The Alveaux is the most daring suit in the collection. It has skinny, flat front, bright yellow trousers paired with a navy blue blazer with red and grey stripes. It’s a dressy, yet casual suit.”

The black, hooded The Mr Martin jacket has a semi-formal twist. “The response to this line has been very good and positive,” said Eugene, adding it is only made to order and costs Dh2,500.