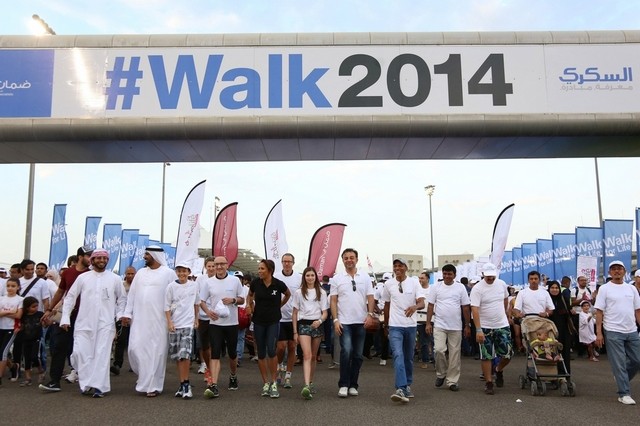 Thousands of people turned out to support Walk 2014, which aims to promote a healthy lifestyle.The eighth annual event drew more than 21,000 people in white walkathon T-shirts and bags, who marched a combined 150 million steps along a 5.5km route at Yas Marina Circuit to support diabetes awareness.

Husband Ahmed Al Attar, 45, 15-year-old son Mohammed, and in-laws Samir, 70, and Esmat, 69, joined Mrs Abdou on the walk.
Walk 2014 is the longest-running public health awareness event in the UAE and is organised by Imperial College London Diabetes Centre and supported by health insurer Daman, under the patronage of Sheikha Fatima bint Mubarak, widow of the founding President, Sheikh Zayed.

She took part in the event with her three daughters, Sara, 4, Sama, 9 and 15-year-old Ganna.The UAE is 15th in the world in terms of diabetes prevalence, with nearly 19 per cent of the population living with the condition, according to the International Diabetes Federation.

This year, health professionals started recording the body mass index of participants, to track levels of activity and health in the community.The results will be published and it is hoped the data will provide a vital insight into the battle against diabetes in the UAE. Also new this year was Health X, a community-orientated health and well-being forum aimed at sharing ideas between health professionals.

Diabetes is one of the major concerns, rising in the UAE community. Most of the people now understand the importance of health and with the Support Walk they are promoting and healthy and better life.

UAE people have certainly waken up to the healthy lifestyle and started taking it seriously. They definitely want to take the issue to all people and decided to take a walk for healthy life.