You are here: Home / Lifestyle / Emirati woman made Officer of the Most Excellent Order of the British Empire 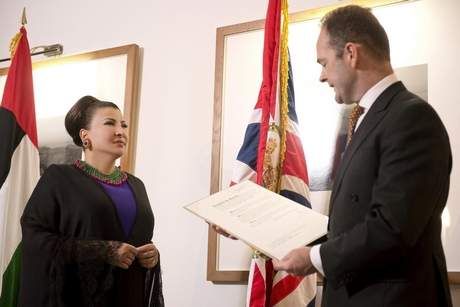 Hoda Al Khamis-Kanoo has been made an Officer of the Most Excellent Order of the British Empire, one of the most prestigious awards that can be bestowed upon someone who is not a British citizen.

The OBE was presented to Mrs Al Khamis-Kanoo by Dominic Jermey, the British ambassador to the UAE.

The honour acknowledges Mrs Al Khamis-Kanoo’s efforts to use the power of the arts as a conduit for deeper cultural ties between the nations.

Since starting the foundation in 1996, strategic partnerships have been signed with the British Council, the Royal Opera House, the Edinburgh International Festival, the Manchester International Festival, and the School of Oriental and African Studies at the University of London, enabling UAE audiences to appreciate an array of British performances.