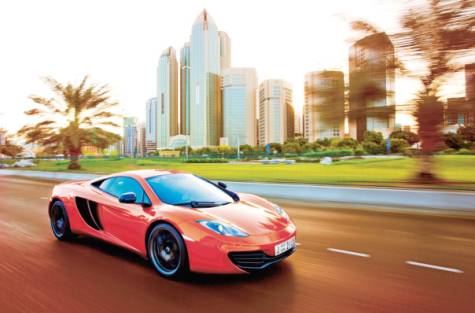 If you are a crazy supercar fan and just can’t wait to get your hands on the supercar then your dream is about to come true. Thanks to the launch of McLaren’s first ever used supercar scheme in the Middle East. McLaren supercar 12C and 12C Spiders will soon be seen on the UAE’s best racing tracks.  The lightning speedy cars, spectators waving flags, electrified environment and the sheer entertainment is what McLaren Supercar has to offer for UAE.

McLaren Qualified is the company’s way of taking used 12C and 12 Spiders and putting them back on the second-hand market with an assurance they are as reliable as new models.

The McLaren Supercar is ideal for taking onto open track days at both Dubai Autodrome and Yas Marina Circuit and Qualified will make that a possibility for even more drivers – who will then hopefully develop that into other areas of motorsport.

Ian Gorsuch, the Middle East regional director for McLaren Automotive told XPRESS that the major attraction of McLaren Qualified is accessibility in that it will give more people then chance to own and drive a 12C or 12C Spider.

He also told that the current Middle East Car of the Year and the response to it has been fantastic in the region and they have decided to launch Qualified in the UAE before anywhere else in the Middle East as it is their biggest market and there are many sports car enthusiasts who this will really appeal to.

Cars through the Qualified scheme are still not cheap with the price stag starting at around Dh700,000. However, McLaren are offering the full free upgrade to 2013 specifications on all models which includes the latest power options ideal for racing around a track.

Gorsuch also added that the UAE is becoming an increasingly sophisticated market in terms of what they look for when buying a s sports car and we are very proud of the performance of the 12C and 12C Spider as compared to our rivals.

With McLaren stepping in the UAE market provides an opportunity for wanna-be supercar drivers, who want to rock n roll on the tracks but are unable to do so due to several constraints with cost of the supercar being the primary constraint. Lets see what revolution these McLaren Supercars will bring in developing the genuine driving talent in the Middle East region.