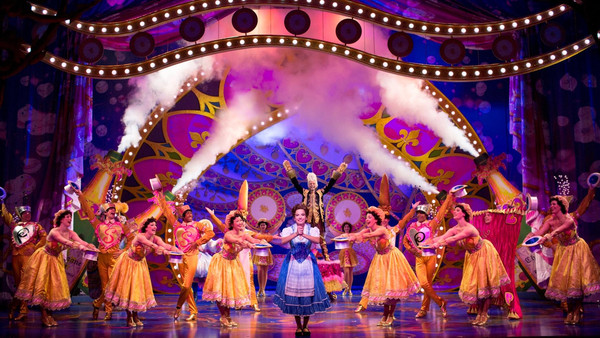 The music and the talent of the other places is now coming to UAE. The people of the nation are now enjoying something which was once not available in the country. The blend of art and culture has started with the Beauty and the Beast.

The Disney characters of a Tale as Old as Time were brought to life Thursday night in the UAE’s capital Abu Dhabi during a dazzling spectacular stage rendition of the much-loved classic Beauty and the Beast.The Broadway musical, which is on its first international tour, has carried the timeless love story of Beauty and the Beast for UAE-based fans as it kicked off last night in Abu Dhabi’s Yas Island.

The first glimpse of the Du Forum theater immerses the spectator in the classical, old-world atmosphere right away, with an image of the tale’s enchanted rose – which threatens to plunge the castle’s creature into an eternity of beastliness if he fails to find love by the time the last petal falls – floating in the background.The thrilling aspects of the production narrated the 1991 Disney animated blockbuster, where Belle – a beautiful, small-town girl, falls in love with a hideous Beast in the story of Beauty and the Beast.

The audience was delighted throughout the show, clapping and laughing at the Beast’s funny attempts to be kind to Belle, and the comical takes between the self-glorified Gaston and his bumbling buddy Lefou.The four costumes worn by Belle throughout the show caught the eye of many in the audience, including her famous yellow ball gown.The show featured a bevy of the film’s characters, including Belle, the Beast and Gaston, the evil character, along with the Beast’s servants Lumiere, Cogsworth, Mrs. Potts and Chip.

The show also included three exclusive songs.Just like the original classic, the castle’s enchanted household ornaments transform back to their human selves as the magical spell gets broken when Belle and the Beast fall in love towards the end.
Although Beauty and the Beast has been the theatre’s eighth longest-running production in history, its debut in Abu Dhabi marked the first Broadway musical ever produced by Disney to run in the Arab region.For many attendees, the bringing of the Broadway show to Abu Dhabi was a worthy experience through Beauty and the Beast.

Music was not so common and fascinating in the Middle East unlike Europe. However, lately the trend is coming to the UAE which is now expanding it and Beauty and the Beast has been the initiation. The 10-day run will last until Nov. 8.