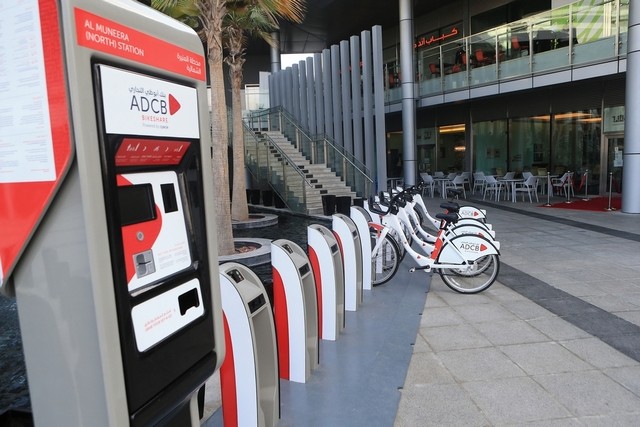 Cyacle, the Cycle Sharing venture of Abu Dhabi has actually responded better than expected. Cycle tracks have been made and also the awareness is helping to curve the pollution and also the environment awareness.

The response to a newly launched Cycle sharing system in Abu Dhabi suggests that Abu Dhabi residents would not mind biking to their workplaces were such an option open to them.

The service introduced last week on Yas Island and Al Raha Beach will soon be expanded to other locations such as Abu Dhabi Corniche, Khalifa City and Saadiyat Island, Hani Akasha, Managing Partner of Cyacle, a firm established by two young Emirati Entrepreneurs.

Once the service on the corniche is operational, people residing in Al Mina and Khalidiya can bike to work between these locations, he said.

Cyacle owned by Akasha, 27, and Mohammad Bashkeel, 27, has received support from Abu Dhabi Commercial Bank (ADCB), which has signed as title sponsor for its first project and hence the project’s name, ADCB Bikeshare.

Initially offering 75 bicycles for hire at 10 locations on Yas Island and Al Raha Beach, the round-the-clock service aims to offer both transportation benefits and support a healthier and more sustainable lifestyle in Abu Dhabi.

Anyone holding a credit or debit card can take the bike on rent by swiping the card at the terminals without the help of an attendant. Customers can either buy a one-day pass for Dh15 or a three-day pass at Dh40, which offers the first 30 minutes of the ride free. If the bike is not docked after the first half an hour, then charges add up depending on the hours of usage. Monthly membership costs Dh99 and an annual membership Dh499.

Both Yas Island and Al Raha Beach were chosen for the first stage as they have a proper cycling path, Akasha said. At Al Raha Beach, most of the customers during the past one week have been residents of the area. On Yas Island, both residents and tourists have been taking the bikes.

The environmental issues and the health awareness are also promptly coming up through this Cycle Sharing programme and organizers are hopeful that they will achieve much success.