You are here: Home / Fashion / Traditional Clothing in UAE 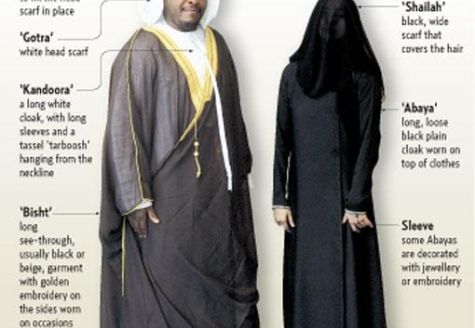 The traditional clothing in  UAE is typical of Arabic countries and is inherited from the Bedouin culture which prevailed in the Arabic peninsula. Today, men and women carry forward these ancestral traditions not least by means of their way of dressing.

As UAE mainly consists of deserts and dunes, the traditional clothing in UAE consists of veils and robes.  The traditional attire is therefore best adapted for the local conditions except for the black abaya which must capture a certain amount of heat due to its color.

Women in UAE wear the abaya, a long black robe with a hijab (the head-scarf which covers the neck and part of the head). Some women may add a niqab which cover the mouth and nose and only leaves the eyes exposed. Alternatively, some women pull their hijab aver their faces so no part of their face is visible.

The abaya is traditionally completely black but today, you might see some with colorful embroideries around the collar or on the sleeves. Furthermore, these days, the younger generations of Emiratis like to wear fitted abayas when these were originally designed to hide or prevent from revealing any physical shape.

All women are all dressed in black which is obviously not the best choice of color considering the extreme temperatures experienced in this part of the world in the summer. This also explains the extravagant air conditioning in public areas.

On the other hand, they are dressed in an extremely fashionable manner below the abaya which they remove when solely in the presence of women or when at home. Similarly, their love for fashion is reflected by the fact that Emirati women buy abaya made by some of the greatest couturiers such as Dior, Pierre Cardin, Channel etc.

The UAE traditional Keffiyeh is white and is held in place by the agal (for which the plural is aghals) which resembles a sort of black heavy duty hosepipe. The keffiyehs worn in the neighbouring countries are not necessarily white and each Bedouin tribe will have its own colours. The younger emiratis prefer to wear red and white keffiyehs like the one worn by the Yasser Arafat and tie it round their head to avoid having to wear the agal.

If you want to wear your keffiyeh without using the aghals, simply make a triangle as described above and use the two small-angled corners to wrap them round your head, starting with the back of the head, and around the forehead to fold it back into the beginning of the loop just behind the ears.